Heavy Medals is a 7-part series that makes up the seventh season of ESPN’s 30for30 podcast, the audio documentary sister program to the sports media giant’s film documentary series of the same name.

This series tells the story of Béla and Márta Károlyi, Soviet-era Romanian coaches who became world famous when their star athlete, Nadia Comăneci, earned the first perfect “10” awarded to a gymnast at the Olympics, at the 1976 Montreal Games. When the Károlyis defected to the U.S. in 1981, they brought their Soviet-style coaching program with them, for better and worse.

The couple are both revered for coaching young gymnasts to Olympic glory over a decades-long career and criticized for the abusive system they employed to get those results. They were also the subjects of a great deal of press. In episode 3, “The Bela Show,” Kathy Johnson Clarke, a 1984 Olympic gymnast turned TV broadcaster, talks about Bela in his heyday: “He was a centerpiece back then. He had the top athletes and he was a show on the floor. He absolutely was a show. They [the media] wanted to tell that story.” And then she says this: “I mean, I was literally nauseous at one point. I said, ‘the show is the athletes.’ I said, ‘you’re creating a monster.’”

Yet, here we are again, in the midst of a series that’s doing the exact same thing.

The Stories Have Already Been Told

The Károlyis’ tactics made national news in 1995 with the publication of Joan Ryan’s famous book Little Girls in Pretty Boxes: The Making and Breaking of Elite Gymnasts and Figure Skaters. In episode 3, we hear clips of Ryan and some of the Károlyis’ former gymnasts on the Oprah Winfrey Show, and we hear Leslie Stahl from 60 Minutes going after Béla for abusive behavior. Top among complaints were that the Károlyis forced gymnasts to over train and train while they were injured, that gymnasts were undernourished, and that athletes were publicly ridiculed about their weight and bodies.

The Károlyis story resurfaces for this telling because at the end of the Károlyis’ coaching careers, they become embroiled in the well-documented pedophile scandal of Larry Nassar. For the first five-and-a-half episodes, we hear a chronological march through the well-paved path of the Károlyi story. Moving into the final two episodes of the series, we meet Nassar and learn about how he figures into the Károlyi world. But this story isn’t fresh either, nor are the allegations tying the Károlyis to Nassar: specifically that Márta had become aware of Nassar’s abuse and didn’t take action, and that the toxic, isolating environment the Károlyis created allowed Nassar’s abuse to thrive.

Summary of a Career

For the non-gymnastics audience, this series will provide some insight into the trajectory of the Károlyis, who have been enormously influential in this sport. And you’ll learn about what shocked so many when Ryan came out with her book: behind all those stellar performances is a dark story.

But even in that telling, this series lacks focus and depth. For so many points of view, and so many voices providing them, there is no clear vision. It’s about the Károlyis, but only through third-person observations and archival tape: the couple declined requests to be interviewed for this series, which is unfortunate. The series leans heavily on archival tape, and we linger a lot in the past to the point of stalling forward momentum of the narrative at large. While there are new interviews, they reveal little that tells us anything new or that we can’t find somewhere else — and we move through so many people, it’s not always clear who’s speaking. And after all is said, there are no fresh reflections to be found: with all this time to look back, some fresh insights would have been welcome.

It’s about Béla being physically abusive to gymnasts in Romania when the couple coached there, but there’s so little context around that environment and the time in history when it took place, it’s difficult to clearly picture what was going on. We’re left weighing that set of abuses against those perpetrated in the U.S., and this doesn’t change the core of our story: the Károlyis used fear and abuse as a motivational tool. Heavy Medals has an ominous true crime tone, but it lacks the kind of depth and detail needed to tell that genre of story. It takes on the fast-paced, upbeat style of a sports story and celebrating Olympic glory, while also delving into the serious and disturbing topics of child abuse and sexual assault.

If You Aren’t Going to Focus on the Athletes, Here’s a More Interesting Path

By focusing on one couple, the series creators missed the opportunity to talk about a culture. A more revealing angle for a non-athlete-centered story could have been to examine gymnastics culture, and specifically the governing body of the sport, USA Gymnastics (USAG), and how the Karoylis were intertwined into it.

We get a hint of that in episode five, when there is talk of a rival of Béla’s named Don Peters and Heavy Medals host Roenigk tells us: “Don Peters was banned from USA Gymnastics for life in 2011 following sexual abuse allegations. But in 1999, he was still one of the most prominent coaches in the sport.”

But the show does not mention the allegations of sexual abuse cover ups by USAG. Heavy Medals also only hints of the abuse that was happening elsewhere and muddles the fact that the Károlyis only ever had as much power as the USAG gave them.

Solely focusing on the Károlyis gives the misleading impression that they alone are responsible for abusive behavior and that without them, everything would be better — and that simply isn’t true. Not only is abuse an issue in U.S. gymnastics, this system spread to other countries as well.

This is something the creators of the 2020 Netflix documentary Athlete A were mindful of in crafting their story. The movie tells the story of the Larry Nassar case through the lens of the athletes who survived his abuse and the reporters who helped expose the wrongdoing of the USAG that allowed Nassar to perpetuate his abuse. In an interview for the San Francisco Chronicle’s Datebook, co-director Jon Shenk said that in portraying Nassar, the aim was to “avoid the ‘one bad apple’ theory of wrongdoing […] the pitfall that sometimes happens with documentary film [or, in this case, podcasts] of blaming one person and letting the system off the hook.”

In the same article, Shenk’s co-director, Bonni Cohen, continues this thought by saying: “He’s [Nassar] a symbol of what can happen when all of the people who should be doing the right thing turn a blind eye. We’re hoping to lead viewers to look more broadly and more deeply at what allowed Nassar to be successful.”

It would have been interesting to have a podcast view of the Károlyis with the same sort of wider angle lens, to view them as a core part of the problem but not the only problem.

By looking at the culture, we would also have had the opportunity to dive into the what’s at the heart of the issues here: turning little girls into Olympic athletes. We can’t forget that at the elite level, this isn’t just about making dreams come true. This is business — and little girls earning medals is the commodity. Even if you remove the abusive behavior that the Károlyis standardized, the focus on bringing girls up to the elite ranks remains.

The 2018 NPR podcast Believed provides a succinct summary that addresses the issue of turning young girls into Olympic athletes head on: “In gymnastics even the best careers are brutal and short,” says co-host Lindsey Smith within the first six minutes of the first episode. “By the time your kid is 2, coaches are watching like hawks, for something they can mold. By age 6, they know which kids have it and which ones don’t. By the time you’re out of college, your body is just done. . . . So for those fleeting years in between, no matter how bad you’re hurt, you suck it up.”

So the big — and I believe highest priority — question is, how do you do that in a way that’s healthy, mentally, emotionally, and physically? And wrapped up in that exploration is touching on the critical concern about how to navigate puberty and avoid the common but commonly-ignored issue of relative energy deficiency in sport, or RED-S, which often results in decreased bone health and delayed development.

Women’s sports as a whole receive less than 4% of major media sports coverage in the U.S., and when you look at TV coverage, that drops to 1–2%. Heavy Medals represents one of the few occasions when a major media brand is doing an in-depth women’s sports story, and this is a big opportunity to bring a women’s gymnastics story to a wider, non-gymnastics audience.

ESPN could have put the focus on the incredible achievements of the athletes who actually got the job done. We could have instead had a story about Simone Biles, for instance: arguably the best gymnast the sport has ever seen. Instead, 30for30 re-told a negative story in a sport that’s been plenty bombarded with dark narratives, especially of late. It’s disappointing to see a show with such great resources and ample staff and backing to keep at more of the same.

A recent Tweet from WNBA player Layshia Clarendon well summed up my feelings about major news outlets putting so much focus on negative stories when they take the rare moment to focus on women in sports: “Also, if the only time you ever cover the WNBA is when it’s bad or controversial news you’re part of the damn problem!”

Because by focusing on the bad news, or in this case the perpetrators of abusive behaviors, you lose or greatly diminish the chance to raise up those who actually did the hard work of becoming great athletes and winning gold medals, as well as the chance to contribute to solutions.

Joan Ryan said it well when she wrote about women stepping forward to confront Nassar about sexually abusing them in a 2018 piece for NBC News; the italics are mine: “These brave women are exposing the rot at the core of their sport,” she writes. “Only their voices and their truth can drive it out. And for the first time in 23 years, I have hope for real change.” 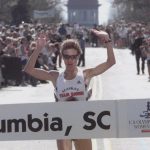