The Importance of Getting Up

We’ve been seeing the articles for many years now: all the sitting we do is bad for our health and is likely to result in loads of aches and pains.

Let’s break is down. A typical seated position most often finds us with our head and shoulders slouched forward. This puts pressure on your neck and upper back leading to upper body pain due to tight, shortened muscles in the front, and over-stretched and therefore weak muscles on the backside. Note that this is also case when we’re looking at a screen of any flavor: cell phone, e-reader, iPad. That’s is, we typically hunch forward a lot. Not only does all this head and shoulders forward leaning create pain in the immediate, over time it can result in a fatty lump developing at the base of your neck. This is your body’s way of attempting to counterbalance the outward lean of your head. Because note, your head weighs roughly ten pounds, and for every inch your ears are forward of your shoulders, it adds another ten pounds of pressure. Your body is attempting to offset that weight by adding a counterweight. And in the meantime, no wonder your neck hurts or your trapezius muscles are tied up in knots.

When we sit our hips get tight and our psoas muscles (the only muscle that joins your torso at your lower back to your legs at the top of your femur) shortens, pulling on the lower back and causing lordosis, or an excessive low back curve. This puts pressure on your lower spine, which can lead to disc issues—and please believe me when I say this: disc issues are not something you ever want to deal with. I know from very painful experience. In the least, this tightening greatly contributes to low back pain in general.

Impact on general health is also bleak. An 8.5-year study involving 240,819 adults (aged 50–71) published in 2012 in the American Journal of Clinical Nutrition concluded thus: “Time spent in sedentary behaviors was positively associated with mortality, and participation in high levels of MVPA [moderate-vigorous physical activity] did not fully mitigate health risks associated with prolonged time watching television. Adults should be encouraged to reduce time spent in sedentary behaviors, when possible, and to participate in MVPA at recommended levels.”

Yes, that’s correct, even a dedicated workout program can’t reverse the damage of sitting too much. Said another way, a 2014 HuffPost article stated that “studies have repeatedly shown the effects of long-term sitting are not reversible through exercise or other good habits.” It’s no wonder why the tagline “Sitting is the new smoking” has become so common.

Not yet inspired to jump out of your chair? I’ll toss in the a great summary of all of the health hazards associated with sitting published in the Washington Post in January 2014 (saving what I’ve already covered). According to that article, sitting is associated with the following:

This is why I’m such an advocate, especially for people who do a great deal of sitting (which is a lot of us), of getting up and moving regularly. It doesn’t have to be much, but a little something multiple times each and every day is critical. My recommendation is, when you know you’ll be parked at a desk or similar for a long while, set a timer for every 15 or 20 minutes. When it rings, get up, stretch, jump around, windmill your arms, take a short walk—do something to move your body.

If you are in a situation where you can’t get up for long periods of time—if you have to drive, sit in long meetings, or fly often, for instance—help reverse the tightness of sitting with “gut smashing.” In essence, you get yourself a medium sized squishy playground ball, lay on top of it face town, and roll around on it anywhere between your pelvis and ribs—that is, your abdominal region—paying special attention at getting into that particularly painful area (for most people, at least) slightly in from your hip bones (or, said another way, on either side of your belly button): this hits that psoas muscle and loosens it up. It sounds awful, and it can be rather uncomfortable, but it is so effective. This short video shows you how it’s done:

Also important when you are sitting is to regularly check in with your posture. Is your chin tucked in such that your ears are over your shoulders? Are you sitting tall with your core engaged instead of dumping into your diaphragm? On that note, that slouched over position decreases the ability to take in a full breath; instead, we end up with shallow chest breaths. This mimics what happens when we’re in a fight or flight situation, so it elicits a stress or anxiety response. Fun, right? As if work wasn’t stressful enough. Also check, Are your feet planted flat on the floor parallel to each other?

Of course, ideally, we’d all have standing or treadmill desks, or better yet, multiple work stations requiring multiple different ways of holding our body. For my part, I have three work stations I cycle through (but I’ll also note that I have the freedom that comes with working freelance): one seated on a yoga block working at a low table, one seated on an exercise ball at a conventionally tall table, and one standing. For the latter, I have a wobble board or a foam pad to stand on to make my standing more dynamic. The gist is, mix it up if you can. Get creative. There are so many options out there these days and employers are getting more and more knowledgeable about the importance of people not sitting all day, so are becoming more open to optional ways of setting up work spaces.

I know it’s a lot. But taken on a little at a time, you’ll eventually find that these behaviors become second nature. It can also just be fun. And the payoffs, in increased health and a pain-free body, are so worth the effort. 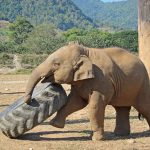 Elephants, Art, Ireland: A Blog about Things I Love, And Other Stuff In My BrainspaceThoughts, Uncategorized 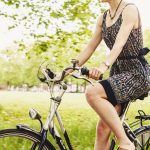