A few years back, I wrote the blog Twenty-Six Day in Nicaragua, about my nearly month-long trip to that country. This is an excerpt, Day 8, one of my favorites.

I awoke around 7 a.m. to another stunner of a day in Jiquilillo; after a quick breakfast, we met up with the couple we’d be on our Padre Ramos kayaking trip with, Elizabeth and Bruce (they were also staying at Rancho Esperanza; fun coincidence, too, they had check in to the same exact room we had stayed at at Lazybones in Leon the night after we’d been there), and waited for the 8:00 bus to our meeting spot with our lead guide, David (whom we’d already head wonderful things about, and they were completely merited). After a mere 1 k (had we known, we’d have walked), we arrived at our meeting spot, and shortly thereafter, a brightly smiling and charismatic David arrived and led us on the short walk to where we’d prep for our departure. There we met the trip cook, the delightful Maura, and overall camp overseer, the quiet and dearly friendly Saul. We packed what we’d need for the day in a dry bag, put on loads of sunscreen, handed over our overnight bags to Saul and Maura (who’d take them via motorboat along with all the Ibis-supplied camping gear and food and beverages to a small island in the estuary where we’d camp for the night), and boarded our tandem kayaks. In short order, we were paddling in the quiet, calm waters among the thick mangroves and abundant resident birds. I was instantly in love with the entire experience, and it only got better.

We kayaked for about two hours, through waterways wide and waterways narrow; waterways deep and waterways shallow—at one (but only one) point, so shallow and narrow, in fact, that we had to, for a short bit, shove our way along by pushing paddles against mud while pushing aside branches. We were, indeed, in not-oft-traveled waters (and mud; although we did learn later that women do slog through the sort-of walkable areas in search of clams, which bury themselves in the mud). Throughout, we saw (to my complete delight), as promised, loads of birds. And David, whose own interest in and knowledge of all local feathered fliers, is great; he travels with a bird book to ensure proper identification and to show us in clearly drawn form what we’re looking at or, later, have seen. He also, at the end of the trip, made us a list of all the birds we’d encountered. By the end of the following day, that list included the following: magnificent frigatebird, brown pelican (they’re huge!), neotropic cormorant (in Spanish, they’re called pato chancho, or pig duck because they sound a bit like a piggy and they’re kind of duck-like; I think it’s appropriate because they are hog-like in their habit of overtaking other birds’ habitats), snake bird, snowy egret, little blue heron, tricolored heron (my second favorite), reddish egret, green heron, great blue heron, great egret, white ibis, wood stork, osprey, black vulture, whimbrel, greater yellowlegs, lesser yellowlegs, willet, sandpiper, plover, yellow-crowned parrot, scissor-tailed flycatcher, mangrove swallow, black-necked stilt, peregrine falcon, and (my absolute favorite) roseate spoonbill. I was in heaven.

After our first few hours, we stopped for lunch at a small island. For us vegetarians, it was the Nicaraguan staple: gallo pinto (aka, rice and black beans). After a short swim, we packed back up for another couple hours of sublime paddling. Then it was to our small island where Maura was already cooking and Saul had already set up camp, complete with a basin of water in front of each tent to rise off feet before entering. We enjoyed a wonderful meal (that included much more than gallo pinto) and even a cold beer, and then David offered to take all-comers on an evening paddle; my husband and I jumped on the chance. It was a truly memorable excursion especially when the theater of the sky featured, to the west, a large setting sun and, directly opposite and exactly the same size, a full moon; it was as if a giant hole punch had cored a perfect circle into the universe.

We paddled back in the almost dark—and saw feeding murciélagos pescado (fish-eating bats)—and shortly thereafter, camp being among the trees, we all went for a walk to check out the receding tide. To our total amazement, what we had just hours ago paddled through had become a vast mudflat; it was an entirely new world. Never before had I see such a large swath of land change so dramatically. In the morning, after a peaceful sleep, at least for me, we’d learn that the fauna changed drastically, too: the entire area was teeming in thousands of crabs. 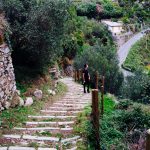